Ahhh, morning sickness. The quintessential pregnancy experience in which a woman heaves a whole plate of eggs into her own hair – ask me how I know. No other mammals seem to vomit during pregnancy, so what makes us so . . . uh . . . special? (source)

While there’s no perfect answer to this question, today we’re going to dive in to the top theories about what causes morning – or more accurately anytime sickness – and in the next post we’ll discuss morning sickness remedies that may help.

As always, please keep in mind that this article is for informational purposes only and is based on the opinions of the author. It is not intended to be a substitute for professional medical advice, diagnosis, or treatment – a full disclaimer can be found here. Okay, let’s jump in!

Morning sickness affects about 70-80% of all pregnant women. (Lee 2011) It’s probably caused by a combination of factors, including hormones, nutrient status, genetic factors and sometimes the presence of certain bacteria in the gut. Some researchers also believe it has a protective component – in other words, they believe morning sickness causes women to avoid foods that may be contaminated or spoiled.

Understanding the possible causes may help mamas avoid or reduce the severity or duration of nausea during pregnancy. Let’s take a look at the top theories about what causes morning sickness and what the research says about them.

This theory – which has been popularized by two Cornell biologists – “suggests that morning sickness and the aversion to potentially harmful foods is the body’s way of preserving wellness of the mother at a time when her immune system is naturally suppressed (to prevent rejection of the child that is developing in her uterus) and has reduced defenses against food-borne pathogens.” (source)

The researchers state that many of the foods women most often have aversions to – pastured eggs, meat and fish – might have harbored harmful pathogens before the advent of modern refrigeration and food-handling practices. They note that in several traditional societies where morning sickness is virtually non-existent, the dietary staples are plant crops that have a very low likelihood of carrying pathogens.

Critics of this theory state that traditional pastured eggs and meats actually have far less likelihood of carrying pathogens than modern, industrially raised meat and eggs. They also point out that many women see an improvement of symptoms when they add certain nutritional supplements, particularly ones that contain nutrients found in eggs and meat – Vitamin B6, for example. Finally, they remind us that plenty of women carry healthy babies to term without morning sickness, often while consuming meat and/or fish and eggs.

Theory # 2 – Morning Sickness Is A Result of Nutritional Gaps

Studies have shown that improving levels of certain nutrients – particularly Vitamin B6 – often improves symptoms. (source) That may be because they play a role in hormone balance– particularly the regulation of the hormone cortisol – which affects blood sugar. Low blood sugar can cause nausea, which is why many doctors and midwives recommend eating frequently to help stabilize blood sugar (every 2-3 hours) when nausea is present.

In addition to B6, other nutrients that may help balance hormones (including cortisol) and stabilize blood sugar are B12, magnesium, zinc and Vitamin D. (source)

Doctors and midwives often also encourage mamas to keep stress levels as low as possible. That’s because excess cortisol – which is often called “The Stress Hormone” – can cause surges and dips in blood sugar. If you’ve ever read advice that says “Just let the stress go” and just feel MORE stressed because you have no idea how to do that, here are eight ways to manually reboot your stress response. 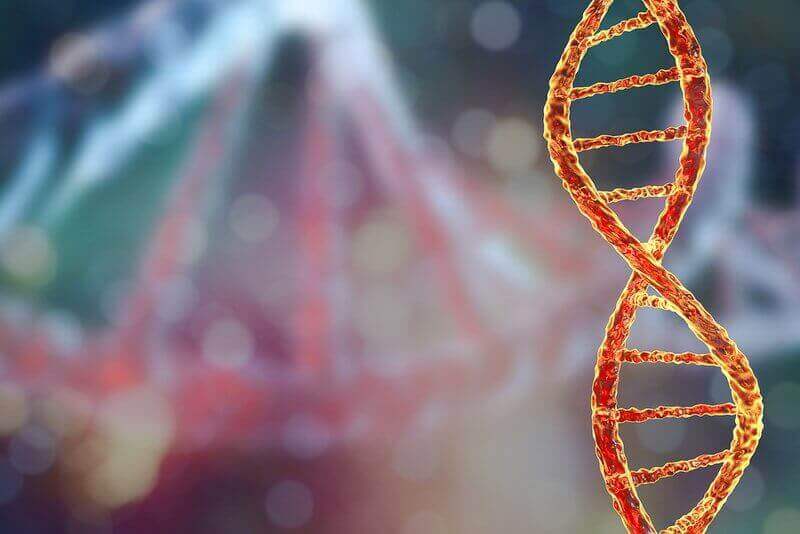 I’ve written before about how our DNA is not our destiny, but some of us do have certain genetic traits which may make us more vulnerable to certain issues. For example, I have the MTHFR gene mutation, which means I have a lowered ability to break down folate into the form our bodies use (methylfolate).

With that in mind, there may a genetic component to morning sickness. It’s “found more often in Western countries and urban populations and is rare among Africans, Native Americans, Eskimos, and most Asian populations.” (Lee 2011)

On the other hand, hyperemesis gravidarum (HG) is more commonly diagnosed in women in India, Pakistan, Asia and New Zealand compared to European, American Indian, and Eskimo populations.” (Lee 2011) Research suggests that different populations may tend toward different genetic mutations that affect hCG (aka the “pregnancy hormone”) receptors, which may influence how their bodies respond to a surge of pregnancy hormones. (source) To my knowledge no one has explored whether these variations do in fact influence pregnancy nausea.

We do know that if a mom has HG, her daughter’s chances of having it are slightly increased as well. However, some argue that this is more due to regional/cultural differences in diet rather than genetics. Or – in the case of hyperemesis gravidarum – something like the prevalence of h. pylori infection may be a factor.

Mamas who have a history of motion sickness seem to experience more morning sickness, possibly because due to a common vestibular (inner ear) mechanism that affects our sense of balance. Other factors include previous migraine headaches (which may in some cases be related to magnesium deficiency) and whether or not the corpus luteum (a temporary structure within the ovary that plays a role in menstruation and early pregnancy) is on the right ovary or the left. (source 1, source 2, source 3)

How long does morning sickness last?

For most women, morning sickness usually subsides around the 12-14 week mark, but for some mamas – especially those with a severe form we’ll be discussing below – it can last through the entire pregnancy.

Many moms have found that building up nutrient stores before becoming pregnant has helped them avoid morning sickness, even when they have a history of experiencing it in prior pregnancies. I include myself in that group – my pregnancy with my first baby was glorious overall, but I did have morning sickness and huge problems with restless leg syndrome.

Supplementing with magnesium helped a lot with my creepy crawly legs, and so as I prepared for my next pregnancy I intentionally built up my stores in hopes that I’d get better sleep. The difference was amazing – no morning sickness at all and virtually no restless leg! (I have nerve damage in one of my legs from an old ballet injury so it’s not completely avoidable when there’s lots of pressure on my hips, but it was much, MUCH better!)

Later on, I read in

What are some remedies that may help?

Great question, here are some morning sickness remedies that moms swear by. 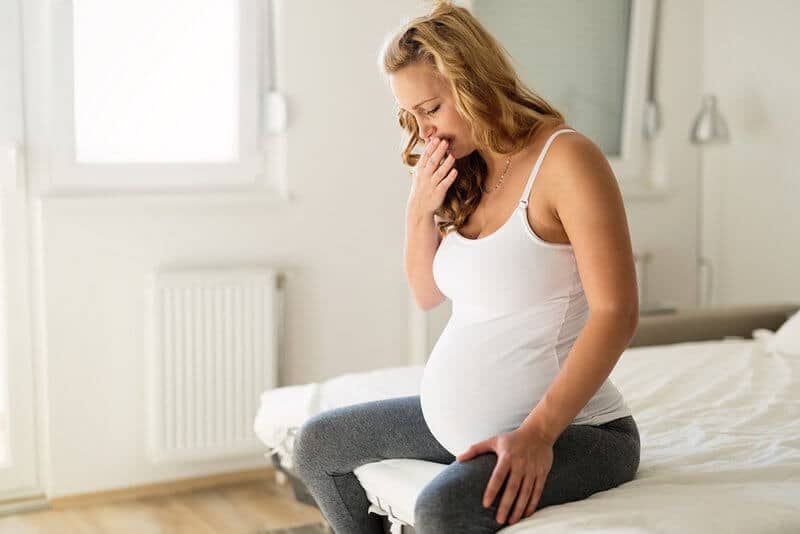 There are several theories about what causes hyperemesis gravidarum (HG), a severe form of morning sickness . Here are a few of the ones which have the most supporting research. Just as with milder forms of morning sickness, the cause is likely to be a combination of these factors rather than just one.

Specifically, the extra surge of human chorionic gonadotropin you get when you’re carrying a girl. According to this New York Times article,

Women who are pregnant with girls may indeed experience more nausea. … Several large investigations have found that women afflicted with severe morning sickness, called hyperemesis gravidarum, in the first trimester are more likely to be carrying a female fetus. Doctors, concluded one study, ‘can say with confidence to a woman who has hyperemesis gravidarum that she has a 55.7 percent chance of delivering a girl.’ The sicker she is, the more likely this is to be true: a 2004 study by epidemiologists at the University of Washington found that women who were extremely ill (hospitalized for three days or more) had odds of having a girl that were 80 percent higher than those of women who did not experience severe nausea. A hormone called human chorionic gonadotropin may be to blame: female fetuses produce more of it than males.”

HG is also more common with multiples, potentially due to higher levels of hormones. However, although many practitioners believe that gender and multiples may play a role, it’s often thought that there are typically other factors contributing as well. H. pylori infection, for example.

About 90.5% of women with HG test positive (using an IgG test) for the presence of a certain gut bacteria – H. pylori – while only 46.5% of controls do. (Lee 2011) It is now “considered to play a role in its pathogenesis,’ but ironically most women who test IgG positive for H. pylorihave no symptoms. Researchers have a few ideas about why that might be:

The “pregnancy hormone” human chorionic gonadotropin – HCG for short – cross reacts with thyroid stimulating hormone receptor sites in the body. Abnormal thyroid function test results “are found in two thirds of women with HG,” but the relationship is unclear. (Lee 2011, HER Foundation) In general these women are not considered to have thyroid problems, although some holistic practitioners argue that what’s considered “normal” really isn’t.

Thyroid function lab tests tend to return to normal around week 18, but HG symptoms may continue beyond that.

Pyroluria is controversial in the health world. Some doctors say it’s not a “real” issue, and some M.D.’s (like this one) say it is, and that it’s relatively common. The same is true for the MTHFR genetic mutation– some doctors don’t acknowledge that it has clinical implications, but its links to several major health conditions are now being discussed in mainstream medical articles like like this one.

Pyroluria is thought to be a genetic metabolic condition which causes elevated pyrroles in the blood. Pyrroles bind to vitamin B6 and zinc, which is a problem because our bodies eliminate the pyrroles (and the B6 and zinc which bound to them) through urine. Essentially, what this means is that individuals with pyroluria are continually peeing out their B6 and zinc, leaving them chronically deficient.

According to Judy Tsafrir, M.D., pyroluria is treatable with targeted supplementation, but should be done under the care of a doctor. Learn more about the symptoms of pyroluria and testing for it here. 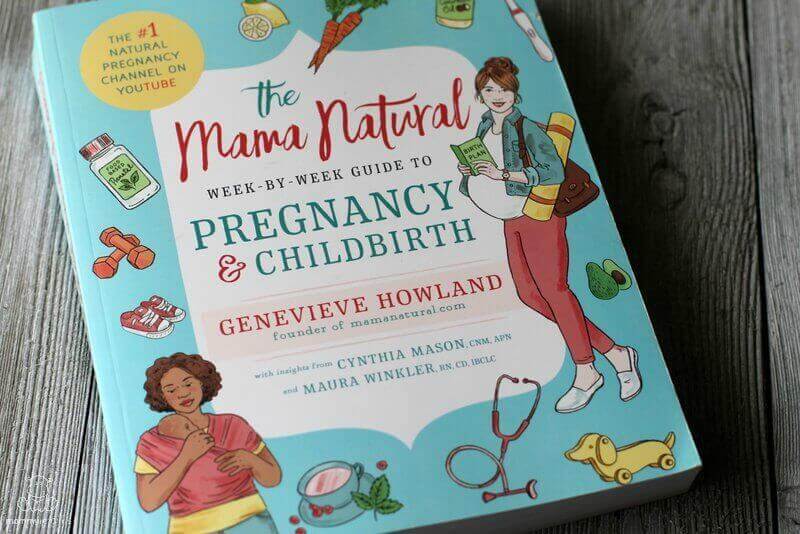 If you’re looking for a fantastic all-around guide to all things baby, I recommend The Mama Natural Guide To Pregnancy & Childbirth. 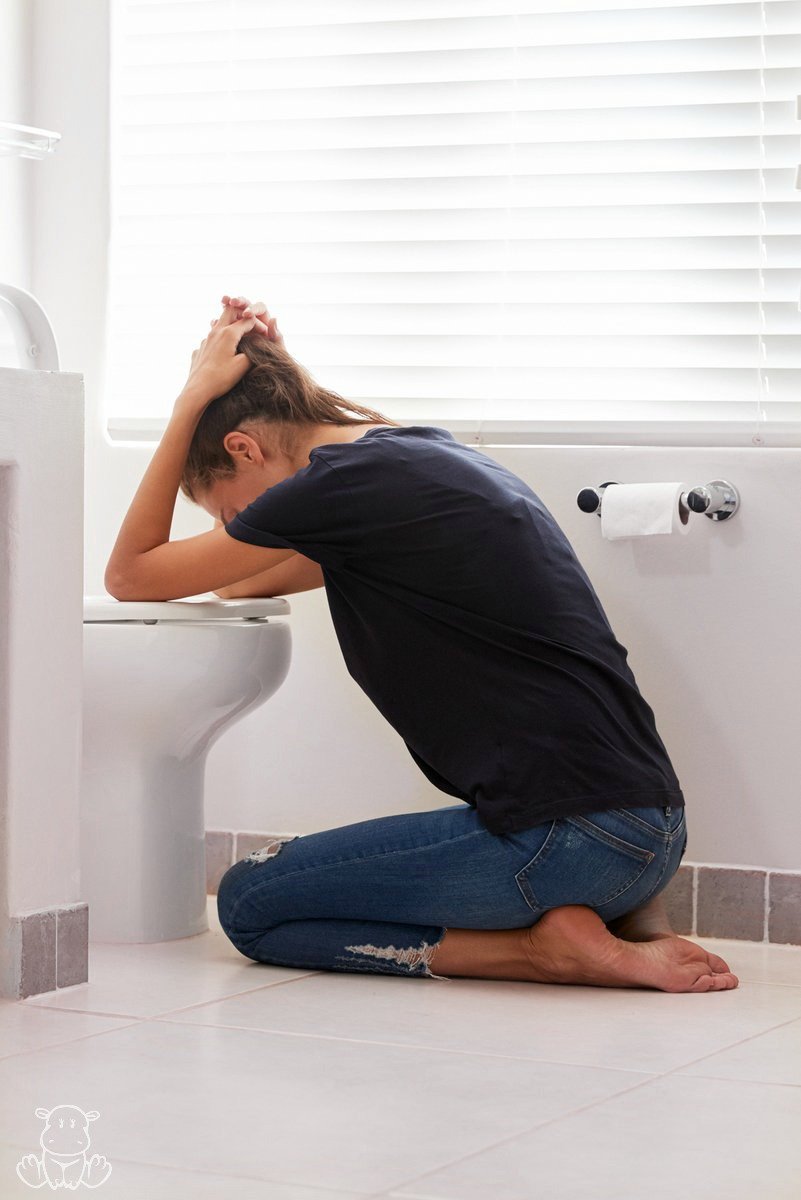 Learn The Three Irresistible Promises That Grow Any Business eBook